4 unusual ways to save money everyday

Trying to get out of debt or save?

You’ve probably been told a million times that you need to create a budget and cut your spending.

Great starting point but here are a few unusual ways to save money you probably have not heard of before.

These everyday changes could add up to thousands of dollars over the year.

1. Plan your groceries for the week and stick to the plan!

You’ve probably been told to do groceries instead of eating out. Without a doubt, that saves you a ton of money.

What you may not have read is that coming up with a daily plan is a huge money saver.

If you don’t map out your meals properly, part of your shopping cart will end up in the trash. We waste astronomical amounts of food every year but there are ways to avoid that.

Without fail, if I don’t plan each day out, I overbuy. At the end of the week, that food ends up in the trash.

Think about all the food you put in the garbage. If you took the time to add it up in terms of dollars, you would probably be shocked by how much you’re throwing away.

The first step to break the habit of buying too much is to plan out your meals.

When you go to the store, know exactly what you plan to make each day. Stick to that plan!

You might end up being lazy and decide to order food instead of the meal you had planned to make. I get it, work is busy, you’re tired. It happens to the best of us.

When you want to order food, remember you’re actually paying double the amount of your bill.

Well, if you had a meal planned and you can’t eat it before it goes bad then you’ve wasted that meal on top of paying for your takeaway.

If you’re anything like me, you’re easily tempted by the delicious treats and snacks.

Personally, it’s much easier for me to say “no” to chocolate if I don’t go to the store hungry. As a general rule, I try to eat a meal before I do my groceries or at the very least eat a snack.

It feels like you walk through the aisles wanting EVERYTHING in the store. You only realize you’ll never be able to eat it all after you get home and settle up your stomach.

Next time you’re going to the store, feed yourself first!

It might not be something you think to do regularly but you can score a nice discount if you just ask.

It’s seriously as easy as that!

There’s some kind of social stigma around negotiating. It’s fine for us to negotiate in some places like a car dealership but not others.

Honestly though, who cares?

So what if the person behind you thinks you’re weird?! You’re probably never going to see them again. It doesn’t hurt to negotiate but you’re not going to get a discount if you don’t ask for it.

When have you ever gone to pay for something and the cashier suddenly said: “you know what, for you, I’m going to take 20% off.” I’m guessing that’s probably never happened to you for no reason.

Wouldn’t it be great if that’s the way the world worked? Sadly, it’s not.

Next time you’re disappointed by a service, bring it to their attention.

Next time you go to buy something and notice its damaged, point it out to the clerk.

Unless you’re being unfriendly or just plain difficult, there is no harm in asking. Worse comes to worst, they’ll say no.

That’s the worst-case scenario! It’s really not that bad.

The alternative is paying less. Seems pretty sweet to me as far as risks versus rewards go. You have nothing to lose! Definitely worth asking.

Here are a few other examples of things I’ve scored easy discounts on:

Honestly, it’s as easy as asking and the opportunities are endless. You could save yourself thousands of dollars so why not just ask?

3. Do you have credit card debt?

This one is so simple you’re going to be kicking yourself in the butt wondering why no one ever brought this to your attention before.

Getting carried away on your credit card happens very quickly. We don’t realize how much we rack up and before we know it, we can’t make the full payment.

This tip is for anyone who’s used that plastic a little too sparingly.

If that’s you, unfortunately, I don’t have a magic wand to make it disappear. I wish it was that simple. I can, however, help you easily save hundreds of dollars on your interest.

Most credit cards run at about a 20% interest rate. A line of credit, however, is usually at least half of that.

Did you know if you ask your bank to open up a line of credit, they can transfer your credit card balance to that account?

In other words, you can save roughly 50% of your interest EACH MONTH by just switching your credit card balance into a different account.

It honestly doesn’t get much easier than that!

4. Don’t buy because of a sale

There’s no doubt about it, seeing something with a 50% or more sticker on it makes it SO DAMN TEMPTING.

I mean why not?! You’re saving so much money!

Realistically though, it’s all part of a plan to get you to take your wallet out.

If you were planning on buying it regardless, then SCORE!

If you weren’t, ask yourself whether you really need it? Or is this just a want? an impulse because it seems like a such a good deal?

It may feel like you’re saving money but you’re still leaving with less money. Money which you likely would not have spent at all.

Next time you see a 50% discount on a $100 pair of shoes. Remember you’re not saving anything, you almost just spent $50!

Next time a big red discount sign is shoved in your face, say no! SPENDING is not saving!

Check out these other awesome money saving tips:

CPA & founder of Making Coins Count.
My goal is to empower you to manage your money, save & invest like a PRO.  You deserve the life of your dreams – free from stress & anxiety about money.  Let me show you how. 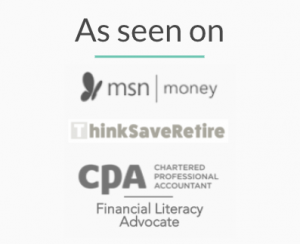